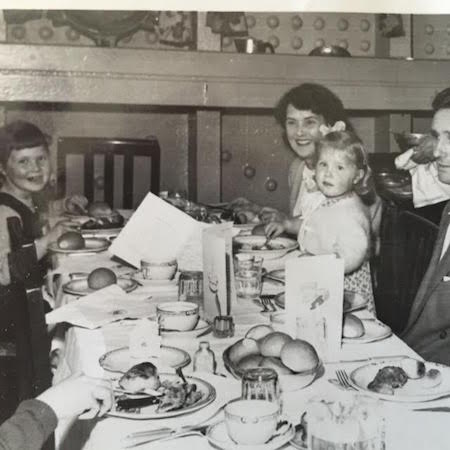 It was a fine day as far as I remember. I was eight years old and sitting in the back of a car. That was unusual enough, because our family had no vehicle and we only knew two people who did. We were in a neighbour’s car and I sensed that this day was one I would remember all of my life. Funny how such a young person can know momentous when it is simply there before them. I looked out of the window at the blue-grey sea and saw the ship sailing down Southampton Water. My Aunt and her two children were on the vessel bound for the other side of the Atlantic. They were sailing away to a new life, looking forward to joining my Uncle in Canada.  I felt lost, missing them already.

They had spent the last few weeks with us, waiting for confirmation of an embarkation date. It had been a special time, especially as I was an only child; being one of a gang of three all of a sudden was a revelation. Auntie B was my Mother’s older sister and during those few weeks there was more laughter ringing out than I had ever felt in my short lifetime. She devised special tasks and games for us three children and we somehow knew we were blessed. After the potatoes were peeled – the mainstay of any meal in the 1950’s – we were all allowed to stand round the basin and peel the peelings all over again. I can remember self-righteously saying that my Mummy would have peeled the peelings so thinly that  there would have been no chance of peeling them all over again. My cousins looked at me pityingly and my Aunt simply laughed knowingly.

That was the essence of the difference. My Mother was the serious one, always worrying, always trying to scrape the last bit of margarine off the paper, always wanting to make things right. Yet, even she melted in the midst of the sunshine of Aunt B’s smile. There was a softening and a whole summer – or so it seemed – of visits to the playpark, picnics in the garden and dancing to the tunes on the radio. Of course, Auntie B was full of the knowledge that she would soon be setting off to join her much-loved husband. . . . . . . and a new beginning in a new land.

There were tensions around the enlarged family that summer, possibly to do with the younger sister seeing evidence of a love of life that she had somehow lost. My poor Mother had married on the rebound; her decision to marry my Father was to mean moving away from home – Scotland – going 400 miles south to the big metropolis that was London. Unfortunately her marriage was clouded by stresses that I could not even begin to understand. In the main, she focussed on a wish to return to her homeland, and I guess that this featured in the evening talks the two sisters were able to have whilst my Father worked late. There would have been comparisons drawn between Auntie B and 3500 miles distance and the relatively easy commute between Glasgow and London.

No wonder it was such a significant summer.

Over the years, the Canadian cousins became five – four sisters and one brother. Letters were the only means of easy communication, and my parents split up and eventually divorced. In the fulness of time Aunt and Uncle came to Scotland for a visit, spending time with my Mother and then with my own family. Perhaps B’s example helped us on our way to growing a family of four sons. The youngest was only weeks old when the Canadians came to the backwoods of the Outer Hebrides. How we landed up there is a whole other story, and at the rate that my Memoirs are coming on, I may never get it written up. B was still the special person I remembered and her spouse was as complicated and charismatic as ever.

Over the years and now into the internet age and through easier travel, the Canadian cousins feel very much part of my life. The photo above, taken aboard the ship in 1952 was sent to me recently by one of my cousins. I cannot possible overstate the joy it gave me. Somehow it filled in a gap and showed me how my memories squared with reality. Sadly, those two sisters born before World War II are no longer with us. Their legacy remains.

When I posted at the end of June I was much occupied by Brexit – the vote to leave the European Union – and the shock it had engendered. Politically things have been changing fast and furious. This beautiful photo has been like an antidote. Much needed and greatly appreciated.

May you find your own form of positive vibes.
Blessings from Dalamory.

This entry was posted in Blog and tagged Canada, emigration, Family, Memoirs, spirituality. Bookmark the permalink.