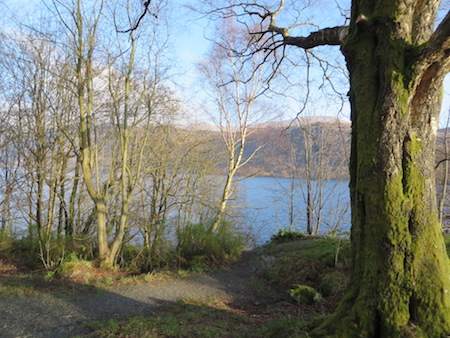 When having a Day Out in January the most important thing is to be flexible. Of course I could have said the most important thing is hot coffee, knowing where the loos are or a decent picnic.  We set off recently for a trip to see one of the oldest Yew trees in the UK, or so we thought. However, despite bright sunshine at home there was a dark bank of mist to the east.  Thus, a quick detour south-west was needed and we were back beside Loch Lomond and thankfully, in the sunshine again.

Having overdosed on news recently about uncomfortable truths or perhaps they were alternative facts, media was restricted to Elvis and the Philharmonic Orchestra – a clever digital re-mix with the real Elvis of long ago and the real Philharmonic of last year. The result . . . .  a happy mixture of vintage Elvis and full-throated sound. Imagine if you will, two golden oldies, no make that three, (Misty counts as an oldie herself now) driving round the January countryside with the sun slanting low over the car, and plenty of stops for sustenance en-route. It did us all good to be away from comment, conjecture and the near hysteria that has made up the news over the last few weeks.

It also made me remember my long-term project of the Memoirs. This has been sadly neglected over the last few weeks. Time to get back in the groove. Segway coming up here – what is it about vinyl, specifically what we used to call LPs or Long Players?  It is supposed to be something to do with the so-called authentic experience of sitting down and listening to a record. Slotting in a CD or clicking on a Playlist is reckoned to be somehow inferior. Well, I have to confess to being a Philistine. I just don’t get it. I can see the point of hoarding old LPs as collectables or even investments, but I am only too pleased to have lost the crackles and squeaks of the record player itself.

Stick to the point, Freda, I keep going down byways in my mind. Come to think of it the first draft of my Memoirs is like that. I suppose it is inevitable that one thing sparks off a memory of another and then off I go into a totally unrelated story.  Too many of the stories around the whole experience of leaving “home”  were dark and frankly depressing. Perhaps I need to consider adding in some mini-biographies to explain. But, darkness was the way things played out. I am forgiving myself coming to a stop over these last few weeks. I really did need to recover. As for how to proceed, well the secret is to picture a memory – one associated with a photograph is helpful and bring to mind the good. Like the photo of Loch Lomond above. Hopefully, with the mind in a happy place, there will be less whining and more cheer to pass on to my grandchildren and descendants down the years.

The rest of the January day out was filled with the memory of driving round the countryside in my father-in-law’s car and parking up overlooking a viewpoint listening to Top of the Pops. Elvis then and Elvis now. By the time we had our last coffee the evening was drawing in, well worth parking up and watching the sun set over Faslane. And there was not a submarine in sight. One thing worth mentioning is that it is nearly February, which is the month before my Birthday Month. And that means time for treats. 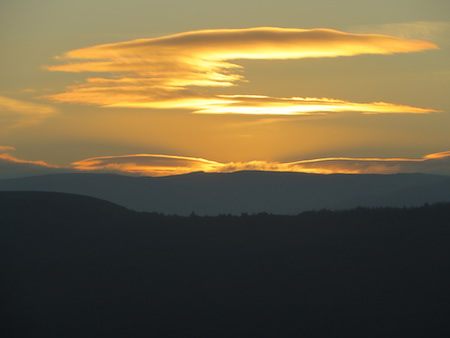 This entry was posted in Blog and tagged ageing, Day Out, Leisure, memories, music. Bookmark the permalink.

7 Responses to January Day Out