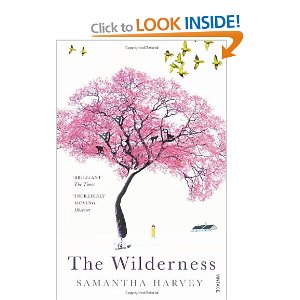 The Wilderness is a very worthy book. Sorry if that sounds petulant, but it is one of those novels which attracts overly-effusive descriptions by the quality papers.

I heard it being discussed on a TV programme during World Book Week, and thought it sounded interesting. Basically it was described as a story about someone who was suffering from Alzheimer’s. Not exactly cheery reading, but it sounded intriguing.

I added it to my amazon list and waited till I had several things in the out-basket. The parcel arrived and then came the moment of truth. I have to admit that if I had picked the book up in a bookshop, it would probably have been put down pretty quickly. The style was clearly convoluted and what I would call a bit arty.

Now I am not usually a lazy reader, but I have struggled on and on with Samantha Harvey’s first novel. Eventually, when I was two-thirds through I decided enough was enough. I gave up – with some reluctance, because I don’t like being beaten. To me the stream of consciousness which wavered and meandered interminably, became more than I could bear. It was no longer clear to me what was present, what was past and what was happening. Maybe that was the point of the book.

Can you guess that I didn’t like it? I would be really interested to hear if anyone else has read it, or to hear your thoughts on highly-recommended books shortlisted in special prizes. For now, I heave a sigh of relief and return to my Nicholas Sparks library book. (More on that later.)

3 Responses to The Wilderness