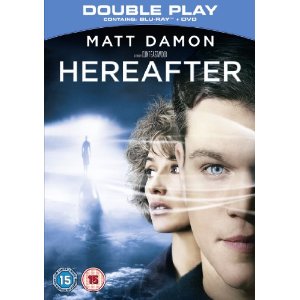 Hereafter is proof that I tend to disagree with film critics on whether or not a film rates highly or not. The advantage to that, is that I sat down to watch the film without too much anticipation, though it quickly became clear from the quality of the direction that this was going to be an interesting movie. But then when Steven Spielberg is involved as Producer and Clint Eastwood as Director, there is rarely cause for disappointment.

This is a beguiling film incorporating three story-lines from different parts of the world and involving three principal characters. One strand concerns a retired, but genuine psychic, played by Matt Damon and is set in San Francisco; the second is the circumstances surrounding a near-drowning in a tsunami in the Far East, and is set mainly in France; the third strand is about disadvantaged teenaged twins in the East End of London. The plot lures the viewer along as each character and story is gradually revealed. One is also led to speculate as to how these three strands can ever be brought together.

In time, this is exactly what happens, with poignant and hopeful results. I don’t want to give anything further away, because if you enjoy whimsical realism, then you would probably enjoy this. The viewer has to work at making connections and that is part of its charm.

I give it eight out of ten and would be interested to know if anyone else has heard of it.