I’ve written before about the traditions that surround Hogmanay. Of course it all depends on upbringing and what has been passed down through the ancestors. Mine were a funny lot, being a mixed bunch varying from Baptist tee-totallers to those who embraced anything which would give an excuse for a party.

There were a lot of things which led into superstition. In other words, if your house was clean and you got rid of all the dirt it meant good things for the coming new year. Similarly, it was traditional for bills to be paid. In my own case, I liked to get my desk clear and in order. Yes – I’m the kind of person who feels better when the bits of paper are filed away and the to-do trays are emptied as far as possible. 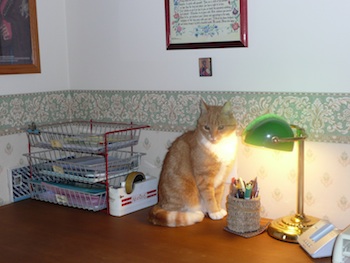 As our cat, Fox, came to the end of his life this year, it seems appropriate to show him in one of his favourite poses. The other one, was sprawled on top of the computer keyboard. He was a fine cat: good at mousing, too good at catching birds and in his elder years becoming more and more stubborn.

Isn’t it strange the way that superstitions can creep into our lives even when we know intellectually that there is no basis for them in actual fact. Yet I have to confess to having this terrible propensity for “touching wood.” I’m not bothered by the throwing salt over the shoulder when you’ve already spilt some. And as for ladders, I look for the best option – ie under the ladder or round it, whichever looks safest.

But here we are on the last day of the year and the urge to clear up, dust, pick up dog’s toys, empty the rubbish………… are all high on the priorities and things to do list. Well, this Hogmanay I am instituting a new regime. Take things as they come.  All the best for 2011 to you and yours.