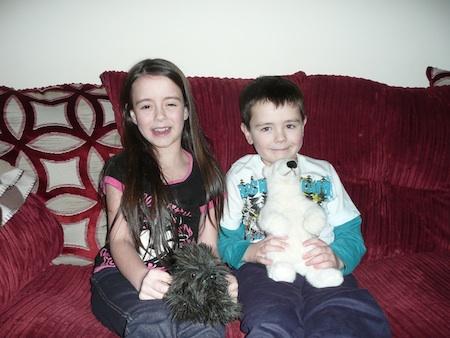 Herein lies a story…….. how long have you got?

These last couple of weeks have been a bit fraught – all to do with Son #3 and yet another removal.  So sitting quietly on a Sunday afternoon it was lovely to get unexpected visitors – Son #4 with his entourage, (the two littlest grandchildren who can hardly still be called The Tinies – they’re growing up so fast.

Like whirlwinds, the mood of the house changed – there was life and laughter and energy…. and an injection of thankfulness for good measure. But my tale is about something that happened just as we were finishing a meal.  Young J appeared holding a white polar bear, he asked if he could take the bear home – he had been doing a project at school on cold places.  His Mummy told him no and that he shouldn’t have asked. When he went to put the bear back I had to tell my story, one which meant I really wanted him to have the bear.

17 years ago I was doing a project myself – writing letters to magazines to see if I could get any published. It was part of a Writing Assignment. The undernoted is the text of the letter and Yes, it did get published, winning the polar bear.

Dear Teddy Bear Club
Unexpectedly coming across your magazine helps me to understand something from my childhood and prompts me to write now. As a small child, I envied my grandmother her collection of bears. They sat regularly on her bed – completely out of character with her rather austere nature. At least, that’s what I thought then. I couldn’t fathom why she had them and crossly felt that she ought to give me at least one. After all, I thought, bears were toys for children and I was her only grandchild. Now I realise that she must have been lonely. I’m sad that I was too young to help her much, but I’m glad she had the bears.

So you can see how important it was that my smallest grandchild should have the bear. I was able to find a toy dog for his sister, so they both had company to go home with.

Some day, I should think about the scary grandmother and tell her story. So often I will mention my Scots Granny – and always with the warmest of memories, but the English one gets short shrift.