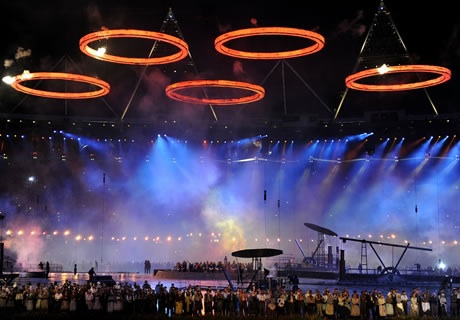 At last the Olympics have got my attention. The opening ceremony on Friday night was an extravaganza of breath-taking proportions. I had to record it as we were at Dance Class on the day, so we watched it yesterday. My head was already full of comments from pundits and friends, but it soon became clear that nothing I had heard prepared me for the actual event.

First of all it was definitely British – quirky, cheeky, slushy and spectacular – Oh yes, and very, very noisy. If it had been anyone other than Danny Boyle as producer, I would have presumed that it had been specifically engineered to be a “let’s cheer up the plebs,” show. It certainly made me pleased and proud to be British, but I was a bit concerned that the remaining 203 countries taking part, would find it incomprehensible. However, it seems that the world does understand and is prepared to be tolerant.

It was a three and a half hour show of theatrical innovation, followed by another hour and  a half of marching participants from each country. The culmination of the lighting the flame sculpture symbolising peace amongst the nations, was imaginative and unique. High spirits and high standards to be maintained throughout the Games.

Highlights for me included:

Think I should stop. My head is full of images and sounds, and wonder at the preparation of a cast of 7500 volunteers.

OK – one disappointment – Sir Paul McCartney – sorry Paul, like many of the singers who are “Oldies” his voice has lost its quality. Performing needs a gracious acknowledgement by him of what he can and cannot do.  (Ah – but what about Tom Jones I hear you ask?  He is still in a class all of his own.)

It’s all very well being an armchair critic – I cannot imagine taking part in such a spectacle without rendering the perfect imperfect. In other words, I know when I am past it too. But what fun. And now the Games are underway; lots to see and learn about over the next couple of weeks. It may have taken me a long time to become interested, but now I am enthusiastic…….. well, let’s not go mad…… I can’t see me watching boxing, or wrestling, but I may give in and have a look at the beach volleyball.

Happy Olympics, and do let me know what you thought of the Opening and what, if any, sports you might watch.

7 Responses to Getting attention