My stressometer has been into the red this week. As well as the credit card problem there have been a couple of extra biggies. I’m not going to bore you with them as I am doing the best I can to zone them out. However, I was interested to read that people who go camping, caravanning or go away in a motorhome are significantly less stressed and also much more happy than those who don’t. 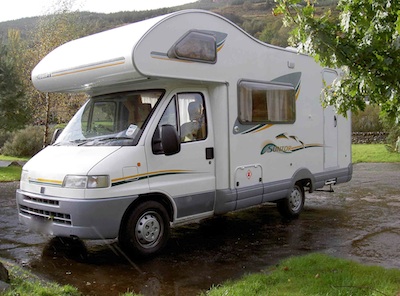 Ta-da…… the proof that we are supposedly happier than we would have been had we not been happy campers. Of course it is impossible to prove that as a fact, but the Camping and Caravanning Club (UK) have indeed done a survey looking at attitudes of those who do and those who don’t

The current Prime Minister, Yes, I do know who he is – David Cameron – (so I presumably do not have Alzheimer’s,) says that as a country the UK should be more interested in what he calls Well-Being rather than Gross Domestic Product. In other words, he states that GWB is more important than GDP. I do wonder whether this is showing a touch of paranoia or desperation. After all he is campaigning against his Deputy Prime Minister (Nick Clegg, in case you have forgotten who he is, which wouldn’t be surprising….) with regard to the type of voting that will apply in General Elections. And the recovery from the recession is wobbly at least. OK we have the Royal Wedding next week, but rising prices, job losses and the impact of cuts on the most vulnerable are very worrying.

I wonder if Cameron goes camping? Or maybe he should go camping?

What strange thoughts for Good Friday. At this time of year, ie before Easter Day, I used to struggle to find an appropriate message to share with people. The best I can do this year is to recognise that there are invariably hard times in all our lives. The message of this day is that, no matter our faith (or lack of it) we are somehow never alone. And it is definitely true that being in the outdoors means we can appreciate creation and the beauty that just happens every year at Springtime.

8 Responses to Stressometer and Camping