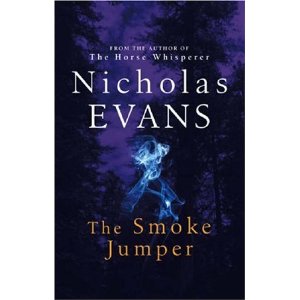 The Smoke Jumper by Nicholas Evans is a difficult book to review, though it was a compelling read. Maybe you know what smoke jumpers are, but at the start I had no idea. The book is set in the USA and initially it follows three principal characters: Julia is a teacher of troubled teenagers and specialises in taking these youngsters into the wilderness to learn survival techniques in practical and psychological ways; Ed – her boyfriend – and Connor are smoke jumpers during the summer season. They are parachuted into the midst of forest fires and form part of an elite and courageous fire-fighting team who basically cut out lines of earth into rock to form fire breaks. That’s a bit simplistic, you can read about the real thing here.

So far, so good, indeed Part I of the book was breathtaking in its writing and beguiling in its story. So good that I am including a short passage in a separate page that you can read for yourself. I put the book down on my knee on reaching the end of this first part and felt breathless and filled with awe for the raw talent and the tugging at the heart-strings it displayed. However, the final two parts fan out to a wider world stage. Connor, a journalist and photographer, for reasons revealed in the book, enters into a life of reporting on the violent and troubled war zones in the world, ending up in the killing fields of Africa via ethnic cleansing in Eastern Europe. I don’t have much stomach for violence. It gives me pictures in my head that I would rather not have. Even my favourite NCIS TV series is a bit too much. So that may give you an idea of what lies in store should you choose to read the book. Interestingly, I was discussing the book with a friend who had read it and they said that they found the final two parts of the book the most interesting.

Taking things to the wire……… I’m glad I read it, but would always have to warn of graphic descriptions and a sense of the novel tailing off as if the author wanted to have it finished. It felt as if he had run himself out of words and grief and compassion. Or maybe…. just maybe it was me, the reader, who was wrung out.

So –  happy reading to you if you are brave, and please let me know what you think.

5 Responses to The Smoke Jumper