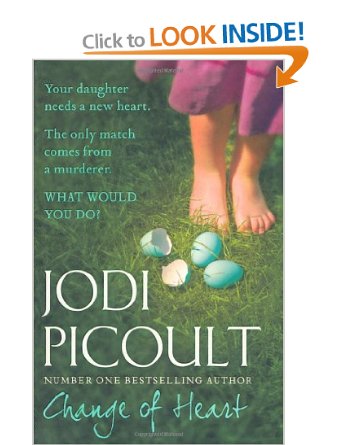 Whenever I am finding it difficult to concentrate on fiction, particularly when I want to get myself lost in a book, I will often turn back to Jodi Picoult. As fans will know, her books tend to the formulaic, but there is always a twist that makes the reader truly gasp at the end.

Change of Heart, is no different, except that it has echoes of The Green Mile, by Stephen King. Looking at some of the reviews I was not surprised to find that some readers have been cross with Picoult – she is usually so original. Nonetheless, this is a book I found gripping for the most part. Some of the meanderings down the Gnostic Gospels felt a bit heavy, but I did have the advantage of having read some of them at university. The legal conundrum here is that for the first time in 69 years there is to be a state execution and the criminal decides he wants to make restitution by donating his heart to a relative of the family he decimated. This produces all sorts of ethical and practical problems which the author explores with her usual thoroughness.

The style of writing adopted by Jodi Picoult works for her, but at times I found myself getting cross at the constant switching between one character-led chapter and another. However, as I stated at the beginning of the review I was deliberately turning to a tried and tested author to help get over Christmas fiction block.

This entry was posted in Book Reviews. Bookmark the permalink.

3 Responses to Change of Heart