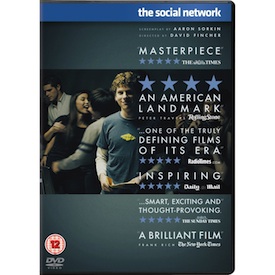 Sometimes I record films to look at later – usually they are movies that I feel I ought to look at, or ones that will make it easier to understand a situation or a person. The Social Network covers both categories.

The way that communication has changed over the last 30 or 40 years has been phenomenal. Sometimes I look at my grandchildren and wonder what life will be like for them when they are my age. They are wired in to texting, emailing, and facebooking (for the older ones.) I stand back and feel dizzy at the mini-whirlwind surrounding them all. To a certain extent my own online world is the same. Texting is not so prevalent for me, mainly because the mobile signal at home is usually non-existant.

That’s the background to my desire to watch this film, which is about the creation of facebook and also covers some of the relationships and ups and downs along the way. At first I found the speed of the dialogue hard to follow, as well as the rapid switching and cutting between scenes. However, perseverance paid off and the whole story unfolds in a way that involves the viewer in the excitement of the development of what is now a well-known social phenomenon.

Has anyone else watched it?

This entry was posted in Film Reviews. Bookmark the permalink.

4 Responses to The Social Network