Wimbledon and Tennis and a bit of nostalgia

Watching Wimbledon is a regular mid-summer event for me. In days long ago my Dad used to take a week of his holidays so that he could watch the second week’s action. Tennis in my childhood played a huge part. Of course it wasn’t like nowadays where young hopefuls are sent to tennis academies, we just spent every available daylight hour from April to September in tennis shorts haunting the local club.

So Wimbledon in particular for me evokes wonderful memories. We could never afford to go, at least not until a boyfriend took me to my first Centre Court match when I was seventeen. Even then, we had to stand. That was in the days before all seated courts, and I’m sure it wasn’t particularly safe. Sad to say, I cannot even remember who was playing, except that it was a ladies’ single. The looking back and forth to either end of the court made my neck ache and subsequently I ended up having a rest in the St John’s Ambulance tent. Happy days! Not like yesterday, when Andy Murray failed to secure a set from Nadal. 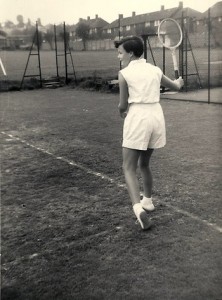 I must have been around twelve when these photos were taken. The state of the grass on the court and leaves on the trees mean that it was well into the season.

Looks like I meant business in the blazer. Must have been watching too much TV.

But how is this for lounging? 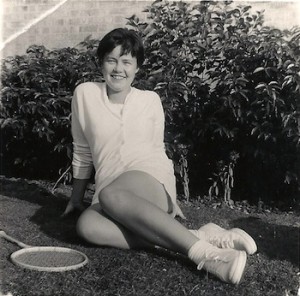 Clearly I fancied myself. There was something about being dressed in the right kit in those far off days that marked one out as a club player rather than someone who had to make do with the public courts and a bit of a knock about. I continued playing for much of my life, though have to confess that the last time I tried to “play” a game was almost a disaster. The competitive spirit was still there, even though it was only five years ago. Let’s just say that my fitness and agility were practically non-existent.

Now where is the nearest tennis court?  Oh well, it will probably be full to bursting with young people in the first flush of enthusiasm. Just like I used to be.

This entry was posted in Blog and tagged nostalgia, tennis, tennis clubs, Wimbledon. Bookmark the permalink.

4 Responses to Wimbledon and Tennis and a bit of nostalgia