Yesterday was VE Day. I was 15 months old at the time. The funny thing is that somehow it has affected who I am today. In fact if you take a long hard look, it has affected all of us. Once upon a time, it seems in another life, I had to write an essay about “The Just War Theory.” The only problem was that it probably muddled my thinking more than ever. Along with my contemporaries I grew up in bleak and austere post-war Britain. Our thinking was coloured by recent anniversaries of things like Auschwitz, the Blitz and rationing. Growing up, there was a diet of war films – not the gritty realism of The Pacific or Schindler’s List, but near-propaganda to bolster up a sense of right that was a total anathema to the generations following. Nonetheless, I want to cry when I see the shrinking ranks of veterans at the Cenotaph. Don’t ask me to explain it. It just is.

Perhaps I should have paid more attention to the WWII generation I helped to bury; saying the words at funerals is not the same as feeling their sense of bewilderment and pain. Today, I can’t help feeling that we need to think seriously about the values of our near ancestors, as well as trying to correct the wrongs and right the injustices.

So – as a tribute and as hope for the future…….. a photo of the blossom that never fails to make me smile each year. 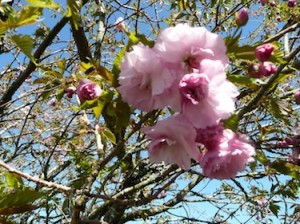