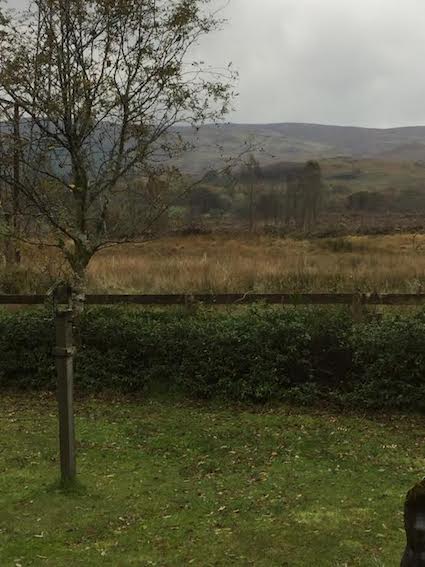 This is a photo I meant to include in the last post. It is the view from the back of the house showing a totally different aspect from a month ago as the trees that were there have now been harvested. They were around fifty to sixty feet high and formed a dense spruce forest.

Apologies for the mist and cloud – I had been waiting patiently for a fine day and then gave up in disgust. You can probably tell that on this day the weather is chilly and unpleasant as well. I can imagine that in sunshine the aspect would be much more cheerful.

It is a pleasant change having an actual view, but I am concerned for the pine martens, the deer, the red squirrels and the siskins. There being no cover close to the garden, they will probably migrate up the hill.

When we moved to this house some 12 plus years ago, the trees seemed quite tall, and increasingly as time passed they blocked out more and more sun. My hope now is that we will get the benefit of the winter sunshine – if it ever comes.

Over the last few days I have found myself in sermonising mode, maybe because my new edition of the CofS magazine is here. I’ve read it from cover to cover and find myself as sad as the weather is dismal. Yes, there are some positive stories, and Yes, there are some interesting reviews of books and films, but overall it seems that the Church is stuck in another century. Many of the people in the photographs are of the more mature variety. And it is easy to find oneself wondering where all the young people are. In a way that is to fall into the trap of age-phobia or ageism. And we don’t need much encouragement to do that. That then feeds into a strand in politics of that blames all the country’s financial problems on the old people.

It would be too easy to fall into the trap which I believe we are set by many political leaders. That is to say it is wrong to set the different generations against one another. I suppose I was born slightly too early to be a baby boomer, and not long enough ago to be a curmudgeonly old duffer. (That’s my claim anyway.) But bear with me, I do have a valid thought to offer. We are force-fed statistics which show that when waiting times in hospitals are increasing, it is because there are too many old people. NHS finances are under strain because there are increasing numbers of elderly and frail people. And the older generation had it easy compared to young people today.

Now I happen to believe that young families are having a particularly hard time. Too many jobs are low paid, have uncertain hours and do not constitute a living wage. People are scared to be off sick and end up working until they are broken or breaking. And too many rights are with the employers, because that is what the ballot box has decided. But there is a truth in the cost of health care being a specific problem which impacts upon the whole of social care. Modern medicine is the victim of its own success. There are so many medications that can help to prolong life, even though only for a few months. But spending money on these drugs is the only way that knowledge can be progressed.

So the answer comes back to money.
It often does.

I had better stop. This is all a bit serious for a bleak Wednesday afternoon. Do you have any experience of ageism, or any -ism for that matter? And what do you think of the continuing austerity programme.

Despite all that, or perhaps because of all that – Blessings from Dalamory.

This entry was posted in Blog and tagged ageism, Church of Scotland, NHS, politics, trees, weather. Bookmark the permalink.