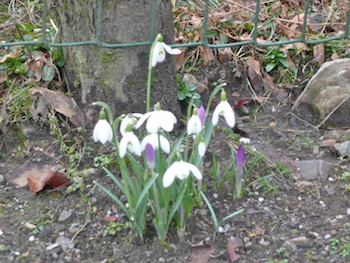 This is the end of the month before March and you Dear Reader may well remember that March is of great significance because it is my Birthday Month. That means permission to organise treats and ponder retail therapy. I suppose that more importantly it is the month when we can genuinely say that spring is coming, in the northern hemisphere at least.

February has been a bit dark and forlorn, or should that be rephrased – I’ve felt a bit dark and forlorn at times. I have kept waiting to write a blog post until the light penetrated my psyche, but have to admit that it has been a long time coming. It used to be that March heralded the start of some trips away in the campervan, anywhere as long as there was an electric hook-up so that warmth was assured, and near enough not to be a major expedition. But of course it was last year that the trusty motorhome went to pastures new.  Treats, then, will have to be of a different kind. I am determined not to start a dreary diary into old age, so I should make a confession. The treats have started early this year. In defence I would point out that our elders and betters often say that though the years pass more quickly, the better weather is a long time coming. Oh no – am I becoming an Elder and a better? 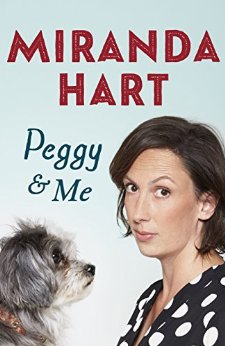 Finishing reading one of my Christmas gifts has been an absolute pleasure and delight. It took me a while to get used to Miranda’s style of writing, which is actually very like her speech patterns – ie scattered, random and at the same time annoying and endearing. But the book is sheer laugh-out-loud especially for dog-lovers/owners/watchers.  Picture a wet and grey and darkening winter afternoon with HMTW and myself sitting opposite one another in the porch. Misty is snoring contentedly on my knee and suddenly I am struck with the need to giggle which turns into the inevitable chuckle swiftly followed by large guffaws, difficulty taking a breath and a cross-patch dog and a long-suffering husband saying – OK what is it this time? This results in me reading out the particular passage and the laughter coming all over again. 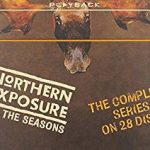 sifting through the dvd collection searching for loved films and boxed sets. This led to a new look at Northern Exposure, a slightly whacky Arthouse kind of series set in Alaska in the early 1990’s. I was going to say made in Alaska but most of it was filmed elsewhere. However, that didn’t put me off so we are now making our way through the whole series which is even stranger than I remember, but again, it is laugh-out-loud therapy for dark days and difficult times.

This was made all the more enjoyable by renewing an acquaintance with John Corbett, an actor who also appeared in My Big Fat Greek Wedding and MBFGW2. He plays the part of the local radio philosopher-type-DJ in Northern Exposure and a male romantic lead in the Greek saga. Incidentally #2 was equally as good as the original, a feel-good movie that helps with brightening life. You may have noticed I skidded over the dark times reference. More or less intentionally because I suspect many people in different parts of the world would say that these are darkening times. As well as all those people struggling to cope with personal tragedy, the general populace in the western world faces a total change in world values epitomised by fake news, violence, terrorism etc ad infinitum.

For me that means recognising that it is important to concentrate on the good things around us. The spring bulbs, the song of the chaffinch, the snow on the mountains. We find our faith through one another and the many kindnesses that ordinary people of all faiths, show to others. I’m trying to resist the temptation to hop into end-of-sermon-mode, but it is hard. . . . . . . .  you’ll have to forgive me.  It is a special time of year coming up next week, a time for looking forward to new beginnings. I’m going to try to follow my own advice. Advice I used to give to all manner and ages of people. Count your blessings at the end of the day, or rather, think of three happy or beautiful or special things or people.

Happy new beginnings and happy birthday month to all the March babies.

This entry was posted in Blog and tagged ageing, darkness, Films, Northern Exposure, Peggy and Me, spirituality. Bookmark the permalink.