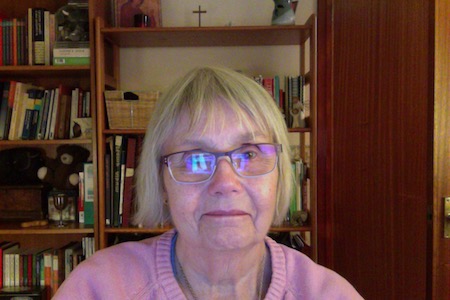 Sometimes I look at this face looking back at me in the bathroom mirror and think, You poor little old woman. Other days I think, Good grief it’s my mother, and more often than not I shrug and carry on with the ablutions regardless.

This is the time of year for looking forward rather than back. I need to think about the future rather than the difficult year that has just gone. Why, I ask myself, have I bothered so much about the state of the nation, and the world, and the universe? Friends have been visiting recently and their attitude is to ignore the bad news, preferring to have hope and beauty in the living room alongside them, rather than violence, war and sorrow. That is a valid way of coping, but it requires a discipline of will that I find very hard to follow. Perhaps it is because of the years of checking the news before stepping out of the house to go and lead worship, or more likely, it is an ingrained habit from my earliest years.

The first time I remember reading a newspaper – I fail to recall which one, though it was a tabloid-style – was on the 10th Anniversary of the relief of one of the concentration camps of the Second World War. I read the text, looked at the photographs and found myself in tears, unable to fully take in what I was seeing. Then I accused my parents saying, How could you let this happen? Of course they were flummoxed. But more so me, especially now as I look back rather than forward, there have been so many times when I have felt helpless and wretched at being unable to change the world and make it better for the sorrowful and hurting.

I know . . . . . .  Here I am still looking back. If this was a sermon it would be so easy for me to find a passage of scripture, a story from the Bible or a homily about good deeds, turning the bad on its head and spinning the answer into some kind of recipe for individual acts of kindness changing the world. On a good day, I truly believe that, but looking at my grandchildren I wonder how they feel. What will I say should they ask, Grandma why do such atrocities happen? or Why are women subject to such violence?

Maturity in faith brings more questions rather than answers, and I know more and more that changing the world starts with me. I want to go on and say, and with you . . . .  but that comes from writing sermons, throwing out challenges and seeing the glass half full instead of half empty.  So please do excuse me and indulge me a bit longer.

Perhaps I want to say this for the first post of 2017 – look forward and stand tall. I believe there is more good in the world than evil. That means there are more good people than nutters. If I ever let myself doubt that, then out comes another rant. And I don’t want Son #3 to say yet again – You were having a right old rant to yourself weren’t you?