Three in a row 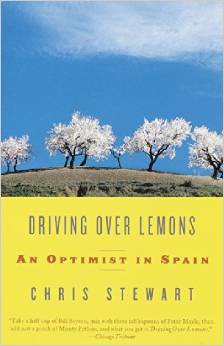 Every so often I get an offer from amazon that I find hard to resist. Their publicist or perhaps their computer churns out a book I like the look of for 79 pence. This time there were three in the series.

The original book was published in 2001 the sequel, – A parrot in the pepper tree was 2002 and the third – The Almond Blossom Appreciation Society, came out in 2006.  I loaded them onto my trusty kindle all and once and thoroughly enjoyed all three.

The author seems to have had one of those lives that make you wonder what you have done with your own. From being the original drummer with Genesis, albeit for only seven months, to sheep shearing in Sweden, his reminiscences roam far and wide whilst being anchored all the while in the mountainous part of Andalucia in Spain. In other words the books are escapism – big time, and all the better for it.

Chris Stewart has an infectious sense of humour, which together with his eye for detail make the reader warm to the people of the mountains as well as the agriculture and animals. His tales of the parrot had me laughing out loud. So I thoroughly recommend them for anyone who enjoys the vagaries of country life, the infinite wealth of human nature and the story of subsistence farming in Spanish style playing out over twenty years.

And by the way, amazon did well out of me because the third book was normal price, but long before then I was hooked.

1 Response to Three in a row