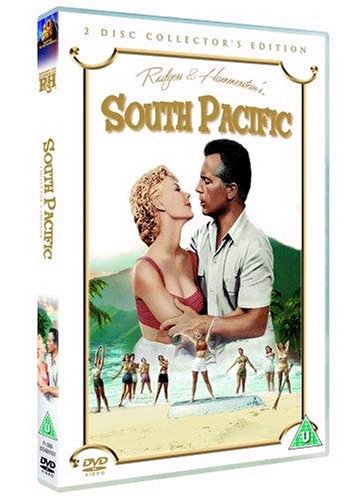 I first saw South Pacific when it was originally released around 1959. It followed on from the Rodgers & Hammerstein stage musical of the same name which first was staged in 1949.

The other night it was decided that a film night was the recipe to right the difficulties of the day. What better then, than a rip-roaring musical. Or was it?

First off I should make it clear that I thoroughly enjoyed the viewing – though it was so long that it took two nights to watch it. I don’t think I have ever watched a film that had a blank screen while the overture played, and then an Intermission with a further musical interlude.

The story is set in the Pacific Islands in 1941. The film credits actually mention the co-operation of the US Pacific Fleet. Apparently, it was filmed largely on location, indeed the film benefits from the novelty of many outdoor but intimate scenes. What was not so successful was the over-use of screen filters, colours, shadings, mutings and blurred edges when there was a musical number. This was presumably because the film followed the stage show and the film colour was the newly released Todd-AO.

Now I was perfectly prepared to stop being so analytical and enjoy the story, except that it was so sexist as to be not true, and as the film progressed it became clear that a major part of the script depended upon the supposedly existing race problems at the time. Not to mention the skirting around near paedophilia or prostitution issues which left me feeling uncomfortable in a way that never occurred to me when I was in my late teens. In other words, this is a film that is almost impossible to watch without being aware of the way the developed world has changed. Strange then that it was so enjoyable to watch. I suspect it was because of nostalgia and was more to do with the me I was then, rather than the way the film was in that era.

However, I could sing most of the songs, even knowing many of the words –  it has an amazing collection. Mitzi Gaynor sang her heart out, but it was a pity that so many other characters had their singing dubbed. Once the film was over I went over to the Special Features only to get hooked on two film buffs critiquing the film in a kind of “over-voice discussion.”  Fascinating stuff, giving lots of information on the stars, the shooting, the plot and so forth. (Hence my interest in looking for a film studies mooc – which, btw I have not so far been able to find.)

One thing not mentioned in the critique was the fact that this had more than a passing nod to gay culture. Even although one of the main songs, I’m as corny as Kansas in August . . . . . . . . I’m as trite and as gay as a daisy in May. . . . . . .  uses the “gay” word in a way which shows that the film has been appropriated as a kind of politicalised gay icon – women like dolls and men with bare chests kind of thing.

Notwithstanding all of that it was great fun to watch., so I shall give it a 6 out of 10. This reflects the shortcomings I’ve been trying to share! Any thoughts?