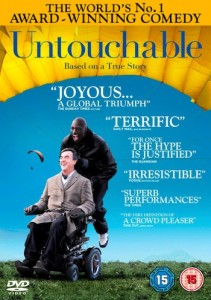 Every once in a while a film comes around that leaves you with a smile. Untouchable, is one such film.  It takes a bit more effort to concentrate on the English sub-titles, nonetheless very little is lost of the dark humour and downright irreverance. What makes it all the more compelling is that it is based on a true story.

Billionaire quadriplegic, Philippe is looking for a replacement carer,  Driss from the slums of Paris is merely attending the interview to get the box ticked on his social security form. However, Philippe takes a fancy to Driss because of his lack of pity. The Carer “forgets” his employer is paralysed at times and in due course a remarkable relationship is formed.

I don’t want to spoil the film for you by disclosing any more, let’s just say I give it a nine out of ten. The only reason it didn’t get a ten is because it leaves the viewer wanting further answers; but you can’t expect the French to wrap it up in too neat a package.

Has anyone seen it?