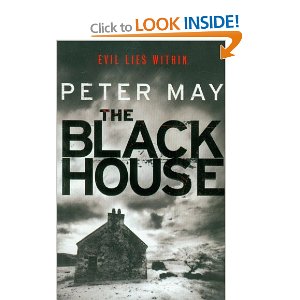 The Black House by Peter May is a superb read and indeed is much more than the traditional who-dunnit kind of thriller. The writer has an immediate and dramatic style which makes good use of shifting time frames, taking the reader right into the mind of the characters.

The Rev Ruth first drew my attention to the author – the middle book of the Lewis Trilogy  was on offer in the kindle store for only 20p and she had tried it out, only to discover a page-turning read.  I decided to follow suit, but came across the other two books and took the chance of starting at the beginning. What a find, made all the more enthralling by the fact that we had lived in the Western Isles for nine years some thirty to forty years ago. The Isle of Lewis has a beauty of its own, a beauty which can sometimes be savage in its intensity, all captured in thrilling word pictures by Peter May.

The story centres round a savage murder investigated by a detective who was originally raised on the island. The people, the landscape, the weather, the harshness and beauty of island life are all vividly told, as is the ambiguity of the relationship between the people and their God. Past mysteries are explored and revealed amidst a race to prevent yet further bloodshed. An absorbing read deserving eight out of ten.

Yes – it was made special for me because of my time living and working amongst the people of Lewis. It is a work of fiction, of course, murder hardly ever happens in those remote Hebridean islands; however, the background research and stoicism characteristic of the area rings true even today.

We lived, it seemed, on the edge of the world. This typically brooding view, is from our kitchen window…. 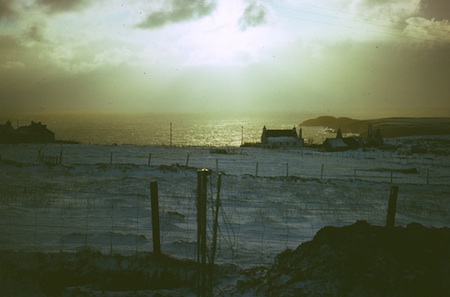 A winter view over the Minch

This entry was posted in Blog, Book Reviews and tagged detective, God, Hebrides, Isle of Lewis, murder, Peter May, spirituality, The Black House. Bookmark the permalink.

11 Responses to The Black House