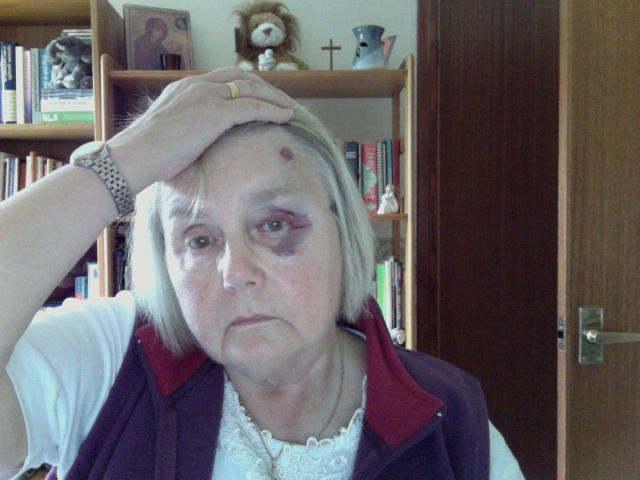 Now I hope I don’t look quite as dozy as this image has made me look. Yesterday morning on a campsite not too far from here, I took myself, an umbrella (large), a towel, shower gel and shampoo and self in well-worn floppy shoes to the toilet block. As HBTW said later – an accident waiting to happen. The toilet block is immaculate – thank goodness – so the trip up the step and consequent bang onto the floor was not as bad as it might have been. However, I gave one young girl a terrible fright and did find myself wondering who it was that was making the terrible moaning noise. “Ooooooohhhhh!!”

Be cheered that I did not swear, did not break any bones, did not break my glasses which I was looking for afterwards: in fact I hadn’t worn them. I did not even have to go to A&E as a very kind doctor appeared and checked me over.  Today has seen an ever-increasing range of colours expanding over the left side of my forehead and face. Every time HBTW looks at me he says “Ahhh” then proceeds to laugh. I, on the other hand have declared a Day Off. We are off to the Dance Class tonight, but I may need to sit a few out.

More tales of the Anniversary Month in a day or two. In the meantime, don’t fall over.

5 Responses to Falling down