Many leaps of faith 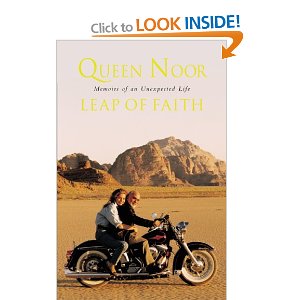 Have had a quiet week and am now recovered enough to potter in the garden and contemplate Dancing Class tomorrow. So all is well at Dalamory.

I found myself trawling the bookshelves for something interesting to read and came across the 2003 memoirs of Queen Noor of Jordain. She is an American born part Arab who married King Hussein in 1978; she was his fourth wife and they were married until his death in 1999.

I haven’t quite finished the book, because it is quite hard going in places. There is a lot of political activism and descriptions of behind the scenes negotiations in the Arab world. At this time of the so-called Arab Spring, it makes for fascinating reading. Noor becomes a Muslim and describes that experience as a coming home for her. She still leads a high-profile life, particularly in relation to Women’s Issues. It is interesting to look her up on google to see how her life has developed since her husband’s death.

Something about her determination to make a difference helps me to be more positive about the difficult things in life. Specifically this week I find that I am able :-

This being the case, the book has done its job well; in addition I am better able to look at the politics of the UK and acknowledge that those involved, of all parties, are seeking the best for the nation. In other words, I have had my own leaps of faith, and it feels better than being upset and worried about the future.Having another perspective on world events helps take away some of the fears and insecurities we all live with.

This entry was posted in Blog, Book Reviews. Bookmark the permalink.

1 Response to Many leaps of faith