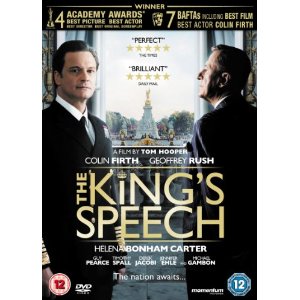 Better late than never with a review. The film has only just been released on DVD so we had the treat of seeing it a couple of days ago.

The truth is that I had seen so much hype and so many clips that I wondered if any film could possibly live up to the expectations planted in my soul. No need to worry: as you probably already know, it was outstanding.

So what do I say that hasn’t already been said? Well, first of all I kept wondering when the real tear-jerker bit would come. As it happened, there were several. One of which caught me unawares whilst King George VI was rehearsing for the coronation in Westminster Abbey with Lionel Logue. Colin Firth and Geoffrey Rush were outstanding in the way they sparked off one another to produce a startling but wholly believable performance.

There is something about the present consciousness of the Western World which resonates strongly with this film. I definitely was not disappointed, indeed it might be said that I learnt more about myself from the story. It helps to have knowledge of some of the background, though it’s not mandatory. I did learn that royalty is always royalty and commoners are always commoners……… (unless they marry a royal of course.) More importantly, I recognised the pivotal role of the monarchy in the UK at a particular time in history. Things are slightly different now, mainly because of the growth of the celebrity culture. In the UK we tend towards wanting to know more and more of celebs and royalty, as if to know they are just human after all. True, but maybe a bit dull at times?

So, Dear Reader, let me know what you think about the film, or about royalty, or about how it made you feel.

4 Responses to The King’s Speech