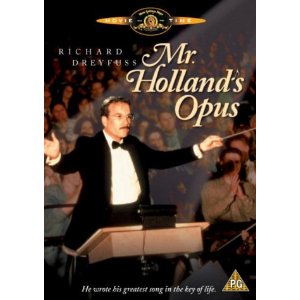 So far it is proving remarkably easy to have Birthday Month treats each day. Yesterday’s was in the form of a DVD. Mr Holland’s Opus has to be on my list of favourite feel-good films – the kind of film that makes you feel good about yourself and the world. And let’s face it, the way the world is just now we all need good news and particularly anything which offers hope for the future.

Richard Dreyfus gives a remarkable performance in this 1995 film. The plot begins with him as a budding composer who takes a job as a High School teacher as a way to save up towards a hoped-for sabbatical of full-time composing. Life being as it is things do not work out according to plan, however, in time his gifts as a teacher become evident and affect many of his student’s lives. His development as a parent and husband are examined honestly and critically, yet without cynicism or over-maudlin sentimentality.

I don’t want to spoil the way things are revealed in the film, but will say that hope and renewal are integral parts of the whole. You may well have seen it – if so I would be interested to know what you think – especially when it comes to the exercise of examining our own lives for qualities that make a difference to those around us. I found myself looking back over what for me are almost a series of lifetimes, wondering just wondering who will remember me……. But that’s a post for another day.