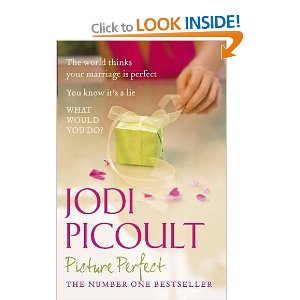 Picture Perfect is one of Jodi Picoult’s earlier novels, originally published in America in 1995 and now published by Hodder and Stoughton in the UK.

It’s always hard with her books to tell much of the story because then the twists and turns are spoiled, so I shall content myself with quoting from the flyleaf.

A woman wakes to find herself lying in a graveyard, hurt and bleeding, her memory wiped clean. She doesn’t know what she’s doing there – or even who she is. She is rescued by a police officer, himself a newcomer to Los Angeles. After days of waiting, she is taken by complete surprise when she is finally identified by Alex Rivers, Hollywood’s biggest movie star – and her husband.

If, like me you like mysteries, then this is the book for you. As a slight spoiler, I shall just say that I enjoyed learning more about Native American culture. It doesn’t merit a 10 because of the slowish start, but is definitely an 8. Let me know if you have read it.