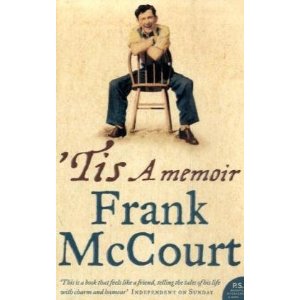 Oh dear – this is me about to show myself up to be illiterate and a bit of an inverted literary snob – at least I fear it may be. Please bear with me, and if you have ever read this autobiography, let me know what you think about the writing style.

I only came across Frank McCourt’s first acclaimed writing – Angela’s Ashes – by means of the film, and that is obviously a cheat. I found the film dreary and sad and not as uplifting as others thought. However, I picked up the book’s sequel – ‘Tis – at the Library Van and barely gave it a second glance as I placed it on the counter. If I had looked inside, something strange about the writing might have struck me and rung a warning bell. The whole book is written as a stream of consciousness, with never a hint of direct speech, but I had chosen the book and I was determined to give it a go. Perhaps I should have given up after the first 50 pages or so; that would certainly have saved me several days of frustration.

It was impossible for me to identify with the person writing; as far as I could see, Frank McCourt was immersed forever in the gloom and desperate sadness of his childhood. The book unfolds revealing his progress throughout his return to America, the country of his birth, but he constantly harps back to Limerick in Ireland, where he grew up. I felt like one of his failed students being forced to read a book which for me held little merit.

To be honest, my main objection is to its style. Perhaps he did too good a job of making me feel his pain and despair. But I like stories where effort is rewarded and a life is turned round. Sorry Mr McCourt, but the you speaking in the book is not someone I find attractive. You sound self-indulgent and whinging and for some reason you make me cross. Then again, it could be that this is the sign of so-called “good” literature, and that could explain why your first volume was awarded many prizes and accolades.

I haven’t looked up any reviews online, and now await the onslaughts from his fans. Bear in mind that I don’t like Hemingway’s style either; it is the direct opposite with lines and lines of direct speech with the odd descriptive sentence thrown in. I feel a bit of a pleb writing about someone of such recognised stature in these terms, but that’s what the blog is about – revealing myself quirks and all. It might show how hard I find it to express dislike or conflict, being someone who is usually a conciliator. (It goes with the job!)

What am I missing – except perhaps a university degree in English or American literature?