Two novels and a suitcase of apples

This past week or so has been respite of a kind. The last month  has been especially busy, so quality time to recover, regroup and read up on ideas and news seemed like a good idea. Every blogger needs a break sometimes. My expectation was to come back and share great insights and worthwhile thoughts on the matters of the day. The actuality was a bit less grand.

We set off for an autumn road-trip in the motorhome, visiting family on the way. We did in fact, manage to take in an exhibition at the National Gallery in Edinburgh. It was on the theme of Gardens and Impressionism. Sounds great, and would have been if only three-quarters of the visitors had stayed away. Struggling round the gallery was like being at a football match, prior to the days of seating and a clear view. Where we went badly wrong, was in choosing to lunch  somewhere that was practically empty and where there was no concept of gluten-free food. Hands up……. we were both to blame. The Better Half (or HBTW) has been suffering ever since, and it is obvious I’ve been trying to do more than I should. How lovely to get home and spend time recovering. Perhaps this week, we can get back to normal.

The good part is that all I could cope with reading were two light and gentle books which share the common characteristic of causing the reader to fall in love with the characters. 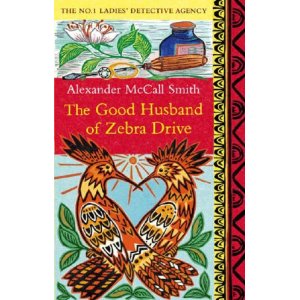 I’ve long been a fan of the No 1 Detective Agency Series written by Alexander McCall Smith. It is sheer escapism into the land of Botswana, where traditional values and the traditional shape of Mma Ramotswe appeal in a timeless and comforting way. It’s so easy to fall in love with this side of Africa, and the characters are treated with such respect and understated humour, that the whole effect is of having a rest cure. It is not a book to be rushed,  rather it is a novel to be read slowly, savouring its taste like the bush tea beloved of the principle character. 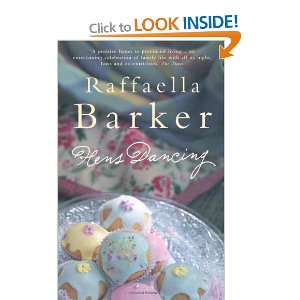 Hens Dancing, by Raffaella Barker, was first published in 1999. My introduction to the author is via a friend who has been recommending her books for several months. I love journals and diaries, so tend to treat novels written in this style with a degree of suspicion. However, the author quickly overcomes the reader’s doubts and the characters and situations in which they find themselves, come alive and convinced me, at least, that all of this was real. That must be an accolade of the highest honour for what is essentially a beautifully written, humorous and poignant novel, about single parenthood and the delights, as well as the disadvantages of a country life. There is a sequel – Summertime (2002) and it is on the to buy list. I intend to reread Hens Dancing and then go straight onto Summertime. Can’t give better praise than that.

Oh yes, I nearly forgot- what about the suitcase of apples in this post’s title? Friends came to visit, travelling 400 miles by bus. They had two suitcases between them; one was full of apples, which we are still enjoying munching our way through. A harvest of the garden and of friendship.

3 Responses to Two novels and a suitcase of apples