Today has been about recovering from the events of yesterday, which involved 6-9 Terry’s All Gold, a very ill-looking little dog, projectile vomiting and short rations for the rest of the day. It seems that temptation was too much for Misty – there it sat on the coffee table, a newly opened box of chocolates with only half the top tray eaten. Now, the coffee table is cairn accessible height, but I was too busy concentrating on catching up on old times with the visitors.

Come Saturday morning and everybody realised the dog was missing, even though there was food to be had at the breakfast table. A quick sortie revealed Herself curled up on the couch, ears laid back and what can only be described as a hang-dog expression. If she could have turned green it would have completed the picture. 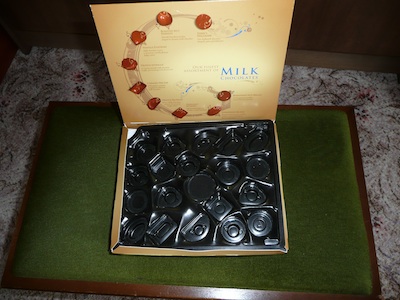 Then….. the evidence…… the box of choccies with the top tray completely empty. Horror…. as it dawned that Misty had overdosed on chocolate. A quick count round as to who had eaten what, revealed that approximately 9 were missing. There was even one round solid chocolate left on the carpet (perchance she was too full for anything but soft centres.)

Below, you can see her confronted with the box. 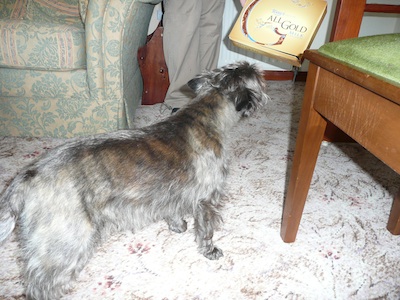 An investigation on google advised that a vet be consulted as soon as possible. I had visions of dashing to the surgery and looking the other way whilst a stomach pump was put into service. However, thankfully, the vet was able to say that as it was milk chocolate and not plain all should be well in time. Phew! He did say that she was a greedy little pig. Having felt the tenseness of her belly I can confirm that fact.

For the rest of the morning the little dog remained immobile and sick-looking. Just before lunch things came to crisis point. By good fortune I recognised the signs of impending doom and let her out. I couldn’t look but HBTW announced – “It’s happened! Projectile vomiting.” I did take a photo, but thought better of sharing it. I’m sure you are relieved at that.

Today, little Miss Mischief is back to normal, though last night she was sniffing around looking for the box. (It is safely in the cupboard, by the way.) She has also been rather hyper-active today.

Talk about the excitement of living a quiet life in the country.

This entry was posted in Blog and tagged cairn terrier, hyper-activitiy, Misty, overdose, Terry's All Gold, vomit. Bookmark the permalink.