George MacLeod once described Iona as a “thin place” where only a tissuepaper separates earth from heaven. It is indeed a spiritual place, as nearly everyone who has been there will testify.

It is impossible to look at the beauty round about without considering the miracle of creation. Saint Columba settled there in 563CE and developed a monastery and a mission work that ventured forth into other parts of Scotland.

I first went there many years ago but did not actually stay on the island until I was a student around 1990. I was a Church of Scotland ordinand and at a student’s week we shared time and chores with ordinands from the Roman Catholic Church. An enlightening time. There was much laughter but also a great deal of sadness about the things that still separated us.

Later, I visited whilst on holiday, and in recent years I was Interim Moderator whilst the congregation of the local Church of Scotland were seeking a new Minister. Earlier on I had become an Associate of the Iona Community, as it had become clear that I shared many of the beliefs and convictions about social justice, peace and reconciliation.

This week I was lent a DVD about the Community 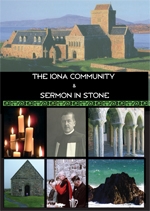 and thereby renewed many happy memories. It contains material from the 1930s and 60s, as well as more up to date information about the ongoing work at Iona, Camus on Mull, Glasgow and the world. What interested most was the differences in expectations back in the 1960s and in 2000. (The year the DVD was finished.) But what really impressed me was some of the interviews where members shared their views of what the Community is all about.

The main thing that came across to me was that Institutions fail when they concentrate primarily on their own organisation and operational priorities. If an Institution is to succeed, particularly nowadays, it needs to be more concerned with interacting with the rest of society. For me, this is what sums up the spiritual attitude that is Iona.

In our local church we have re-started our discussion groups based on Living the Questions. (We are on Sections 15-21). Last night we were thinking about social justice and the example of the Old Testament prophets in being prepared to stand up to their corrupt governments and criticise where appropriate. It was a challenge to think about the meaning of this for each of us in everyday life. What do we stand up for? Where do we seek change? What does it mean to tackle poverty in a world where so many people die of hunger?

What was clear, is that we do what little we can to make a difference. When more and more people act together then real change is possible. But even more importantly is the challenge to raise political consciousness, ours and that of others. In our part of the world the top 1% (by wealth) of people, own 43% of the total wealth. Social Justice must include the premiss that the aim is to work for the common good rather than the individual good.

Our study group covers a lot of ground and in this post I have come a long way from Iona to the rest of the world. In the process I think I am learning how to stop feeling guilty about what I don’t or can’t do, and start being more aware, so that things are helped to change.

2 Responses to The Iona Community