Auchindrain is unique in its concept in Scotland, and visiting on our way home from Carradale was a welcome break in all sorts of ways. Like many an other, I have tried to do some tracing back of ancestors. On my mother’s side the family in the early 19th Century were agricultural workers, so wandering around the remnants of a Highland village was like wandering round part of my heritage. 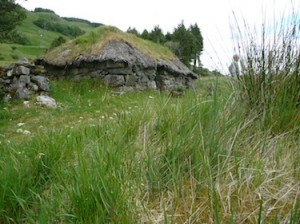 The museum is effectively the remains of a traditional Highland township, and at one time had 80 people living there, living off the land. Other crafts-people provided traditional skills to service the work of the village. (Blacksmith, weavers etc.)

The sense of peace was very special. I sat outside one of the semi-restored buildings watching the swallows swoop and dive round me, and tried to imagine what it must have been like in days gone by. Very different on a wet, freezing day for instance. And hard work constantly, with little in the way of comfort. No wonder people died young. 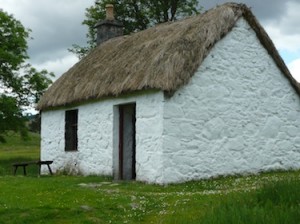 The dwellings were a mixture of single cottages, like the one above, or a long house which had the living quarters for people at one end, and for cattle or horses at the other. The floors were cobbles, made smooth with dung and dirt. Smelly, smoky, peaty and dirty……. So much for romanticism. 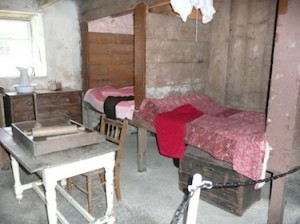 I remember sleeping in a box-bed in my Granny’s Glasgow tenement, just after World War II – but the floor was wooden instead of the stone flags shown here. The flags were an improvement on the cobbles. Floors could be swept properly and even washed. And I had to show you the sink below…….. again, I can remember wiping down one just like it in the late 1940s.  How things have improved.

I need to tell myself that when I get depressed thinking about the recession and the standard of living that most people in Scotland have nowadays. Even poverty is relative. I am inclined to think that the worst kind of poverty is one where education is lacking. But there is also poverty of spirit, when people lack the motivation to make the best of themselves and their surroundings. I suspect that in the 21st Century we can fail to allow ourselves the gift of time to think, so there is a kind of poverty of awareness. But I could well be wrong.

4 Responses to The Ancestors