Strictly speaking, today was a visit to a friend, (John) who has recently moved to Kinlochleven. From where we live it is a 50 mile trip each way over the Rannoch Moor and through Glencoe…… places that invoke romance and spookiness depending on the weather. Today has been mainly sunny so everything looked its best. What surprised me more than anything were the trees. Kinlochleven is at the head of Loch Leven, a sea loch, so spring is further along than in Dalamory. And the blossom trees were stunning. 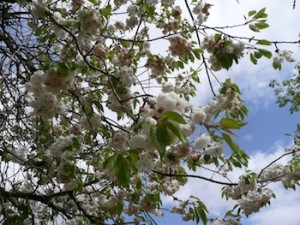 John has recently moved into a retirement complex. I know he won’t mind me telling you that he is profoundly deaf. Ruby is his Hearing Dog, she works to alert John to sounds like the door bell, smoke alarm or mobile phone (for text messages  – Yes, she is that clever, though I am told that she is a little bit lazy sometimes now that she is getting older.) Ruby and John give demonstrations and talks at schools, churches and societies round about. (The charity is Hearing Dogs for Deaf People.)  John is also a (Lay) Reader in the Church of Scotland and is much in demand for leading worship. 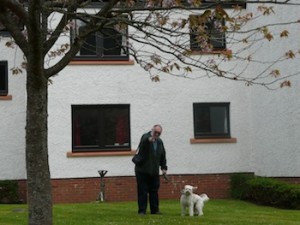 The village is set around the River Leven, and is a stop on the West Highland Way, as well as being a popular area for climbing and walking. 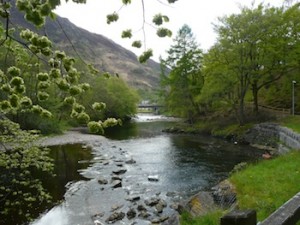 The tail-race is the run off from the hydro-electric scheme. Fascinating just to stand and watch. The electricity generated feeds into the national grid though it would be  sufficient to serve the power needs of the whole village. Or is it a township? 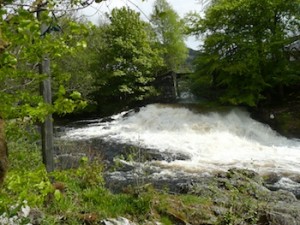 An excellent day – so thank you to John and Ruby. Misty also enjoyed meeting up with them in their new home and going for the walk. And I am glad to be able to think of John sitting at his seat in the window with a view. 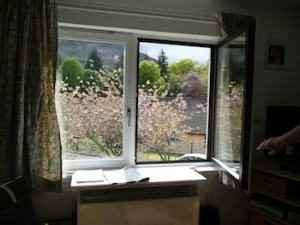 2 Responses to Visit to Kinlochleven