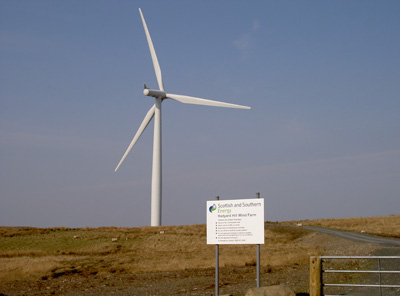 This may be a familiar sight to many people, but I was rather overawed by the sheer power of the beast when I got close. To be honest, I ducked out of wrapping my arms around it as if it were a tree. The noise was the most surprising thing. And what you don’t see in the picture above is the scale of the windfarm itself, with twenty or thirty turbines in close proximity. It has made me rethink my attitudes to renewable energy. Wave and tide power seem less intrusive, but then I have never been close to such a scheme. There are windfarms around Dalamory, and from a distance they look OK and I guess this is the face of rural Britain in the years to come.

The reassuring thing about my up close visit was that the skylarks were giving it big licks up above. Their song even outsang the turbines.

This entry was posted in Blog. Bookmark the permalink.

2 Responses to A familiar sight